What Happened to Mama, The Klamath River Whale?

For use of any images or purchase, visit my website: http://www.ashalaTylor.com

Many of my readers have asked what happened after Mama passed away and what was done with her body.  One blog reader wanted to know if she was just left in the river.  No, she was not. As crazy as the morning of her death was, everything fell into place as far as all involved working together to hasten her removal from the Klamath River and bury her after a Yurok prayer.

On Tuesday, August 16, 2011 she was lying dead in the Klamath River, her home of nearly 8 weeks.  After a short while, white sheets were placed over her body.    A huge backhoe was brought in and her body was moved to the other side of the river.  A huge swath was made in the tall willows by  heavy equipment that was brought in.  This area provided  a perfect place away from throngs of people to perform a private Yurok ceremony to send her off to the afterlife and, afterwards, a necropsy.  A necropsy can be defined as a postmortem examination of an animal.  It could take months for a final report.

I am still filled with sadness whenever I look across the river at the swath that has been made and where this gentle giant was laid to rest.

“The scientists who conducted the post-mortem examination didn’t see evidence of broken bones or bruises, which might have been caused by a ship strike, said Jim Oswald, communications manager of the Marine Mammal Center in Sausalito. The skin was showing effects of the whale’s long sojourn in fresh water, but scientists don’t really know what the animal’s condition was in the ocean, he said.

Getting the tissue samples analyzed could take months. Once scientists receive the results, there’s still no guarantee they’ll know the cause of death, Oswald said.

Looking at the tissues under a microscope can help scientists discover if the whale had a viral or bacterial infection. Examining

the heart muscle can determine if the whale had a heart attack, according to Sarah Wilkin, stranding coordinator with the National Marine Fisheries Service.

”One thing that’s common is parasites,” she said. “They can look at the tissue and actually see signs of a recent or historic infection that may not necessarily be what caused her death.” 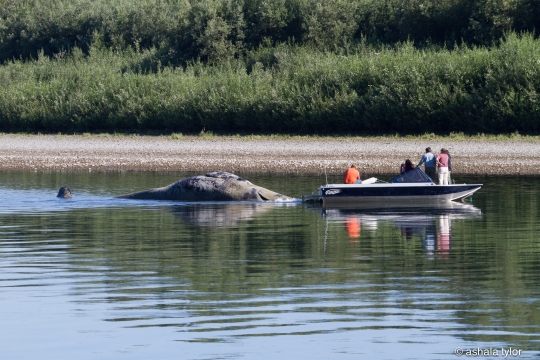 MG_1193 Preparing to Remove Mama from the Klamath River

Img 1124 - Preparing to Remove Mama from the Klamath River

“Today was a very long and sad day as this beautiful being I had come to know and love has left us.  What her message was, we may never know.  Why she was here, we may never know.  There are so many things we don’t know and are not meant to know.  But what I do know is she was truly a “gentle” giant, a loving creature who charmed and mesmerized the throngs of  people, young and old, who came to watch her from atop the bridge, from the water, from the shoreline.

Mama, the gentle Klamath River Whale, we will so miss you and we thank you for gracing our lives with your presence.”

Mama, the Klamath River Whale, Made a Difference in Someone’s Life

Comments on: "What Happened to Mama, The Klamath River Whale?" (1)